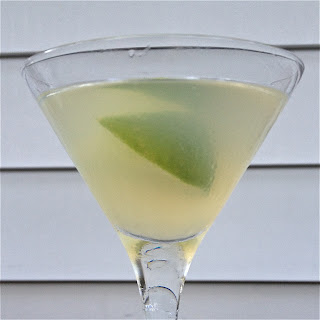 So what's with the name, right?  Who calls a cocktail a 31-11?  Well, here's the story.  A couple of weekends ago we had some of the hockey crew (from Grace's team) over for a little get together prior to the season.  I mixed up some of these bad boys and everyone seemed to enjoy them.  Especially Steve, one of my hockey drinking buddies.  He asked for the recipe, which of course I shared with him.  Of course the ratio of ingredients is important (3-1-1-1).  As he was putting them into his phone so he could remember it came out 31-11.  Hence the name was born.

So how did this cocktail come about?  Well, a few years ago my brother-in-law and fellow cocktail aficionado Jeff came back from NYC with tales of this amazing cocktail called a Walt's Kingdom.  It consisted of orange vodka, St Germain, lemon and lime juice, simple syrup and muddled mint.  I must admit it was a damn tasty cocktail.  But in a true spirit of mixology, I felt it could be improved.  I had a couple of issues with the recipe:

The first was not enough vodka compared to the St Germain.  St. Germain, which is an elderberry flavored liquor, has a wonderful flavor.   However, it can easily overpower the other elements in a drink.  I felt the ratio of the St Germain to the other ingredients needed to be cut down a bit.  The original recipe only had 2 parts vodka.  I increased this to 3 parts.

The second thing I needed to change was the vodka itself.   The original recipe Jeff brought back from New York called for Absolut.  I don't like Absolut.  I think it's one of the worst vodkas on the market.  All marketing and poor taste.  Without a doubt one of the best marketing campaigns ever.  Too bad the vodka doesn't meet that level (the only Absolut I ever use is their pepper vodka, which I use for cajun martinis - it becomes palatable with the hot pepper juice).  I decided to make them with Stoli's Ohranj, my go-to spirit.

The third issue I had was the lemon and lime juice mix.  It's just me, but I'm not a huge fan of lemon juice in my cocktails.  So I decided to make it all lime on the juice end.

The fourth thing I had an issue with was the muddled mint.  I love mint, especially in a cocktail of this nature.  However, I hate muddling mint and I hate muddled mint in my drinks.  Invariably either the mint is not bruised enough to bring out the essence of the mint or you end up with little green pieces floating in your drink and sticking in your teeth.  Since the recipe also calls for simple syrup, which I always made myself, it;s really no extra effort to infuse the simple syrup with mint.  You get the mint flavor with none of the mess.  Win-win in my book.  No muss, no fuss.