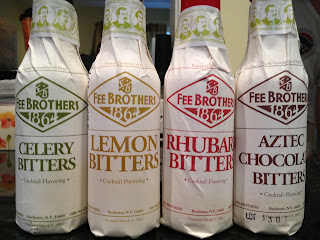 I was pleasantly surprised recently when my friend Ricky called me from the Finger Lakes in NY.  While visiting a local distillery he stumbled upon a vast array of Fee Brothers bitters and called to see if I wanted him to pick me up any.  I decided to have him get me a few bottles (pictured above).  Needless to say I was quite excited.  I'm always on the lookout for interesting bitters, which seem to be  (extremely) hard to find in the local stores here in PA.  As a cocktail aficionado I've come to appreciate bitters.  There is always a bottle of Stirrings Blood Orange bitters in the fridge for making Stoli Orhanj martinis, as well as some Peychaud's. 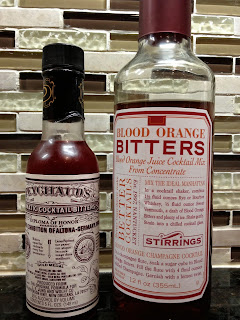 I'm sure there is a bottle of Angostura, which is the most commonly found brand,  around here also.

Bitters are basically alcohol strongly infused with herbs, roots, bark - basically it seems just about anything.  They have a very strong flavor, which is why they are used in very small amounts, usually just a few dashes, when making a cocktail.  Originally concocted for medicinal purposes, they eventually became a staple of mixology and many famous cocktail recipes specify certain types of bitters.

Here is a very brief article on the history of bitters - http://blogs.smithsonianmag.com/food/2012/03/history-of-cocktail-bitters/

So what exactly do bitters do?  It's kind of hard to describe.  They don't really change a cocktail in any major way.  They sort of give a little extra sumpin sumpin, a little oomph.  I like to think of it as adding some depth to a drink.  Not very clear?  Well like I said, it's hard to describe but something you subtly realize as you are drinking a well made cocktail.

I already had ideas of how I would use these bitters.  The lemon bitters I intended to use in a straight up Stoli martini.  Needless to say it proved an excellent addition.  Bitters will stand out more in a simple drink made with a neutral spirit like a vodka martini, which won't have other strong flavors.  I figured the celery bitters would make a nice addition to a Bloody Mary.  However, with all the strong flavors in a good Bloody I feel the bitters got lost and didn't really add any significant.  I'll keep experimenting with the celery bitters in some simpler concoctions.  The dark chocolate bitters I added to a White Chocolate Russian, which was made with 360 Double Chocolate vodka, almond coconut milk.  I really think the bitters added something.  Really took a little edge off the creaminess. 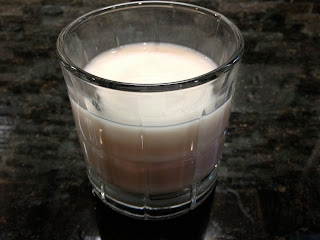 I'm not quite sure what to do with the rhubarb bitters.  I made a Stoli martini with them to get a feel for the flavor.  While quite nice, it's not a martini bitters.  I'll have to give that one some thought on how to properly use them.

So, if you enjoy mixing a cocktail at home and don't have any bitters go grab yourself a bottle next time your shopping.  Start with a bottle of Angostura, the original, and add it you mixology. Get a feel for it and what it will do to your drinks and then move on to other types and keep experimenting.  Your cocktails will improve in surprising and subtle ways.