It was a fun time last weekend here at La Cucina Castano.  Some old hockey friends made their first appearance here.  The Toll's (Rick, Lori and Braden) and the Amsley's (Todd, Beth and Conner) came over for some food, drink and fun.  As always, tried to keep the menu simple but tasty in order to kick back and enjoy some time with our guests. 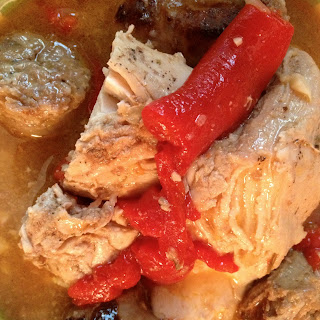 The main course was Chicken Scarpiello, a tasty Italian-American dish made with chicken, sausage and peppers.  I say Italian-American because there is no history of the dish in Italy.  It was developed by Italian immigrants here in America.  Chicken Scarpiello translates as 'chicken shoemaker style'.  There are several theories about the etymology of this name.  It could be because the meager ingredients are all that a poor shoemaker could afford.  Some think that the name is a take on simple ingredients being 'cobbled' together.  No matter how it got it's name it an easy and delicious.  Here a link to a good recipe for this dish -

I varied it a little for a few reasons.  It's better to cook this chicken on the bone for this dish but I had some boneless chicken breasts that had been marinating for quite a few days and I needed to cook them so they went in the oven and cooked by themselves (in the marinade).  I also had some boneless thighs.  These were also cooked separately (dredged in flour and sauteed on the stove top). The sauce I made pretty traditionally though I added roasted peppers along with the hot peppers.  It still had some kick, though.

The side was simple pasta - linguine - with lot's of garlic and olive oil, a little clam juice and a little of the salted cooking water.  Lot's of basil, as always.  The drink of choice for your's truly were Bombay Sapphire East martinis with piri piri stuffed olives, which Rick and I enjoyed thoroughly, as attested by the fact that I had no gin left Sunday morning!  It was great seeing some old friends and very much looking forward to the their next visit here to La Cucina. 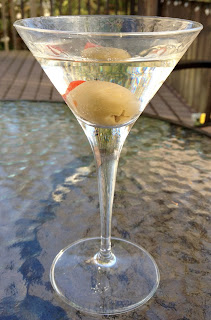 This coming weekend many of the Cucina Castano regulars will be here and the main course will once again be eggplant parm.  Apparently I really nailed it last time so this will be a meal by request, which I don't do all that often, but I love to cook for my friends so if they all want eggplant parm this weekend that's what I'm cooking!  Since this meal will be Friday night, and I have to work on Friday, the eggplant, since it's so time consuming to prepare properly, was put together last night.  I spent a good two hours frying eggplant to make the biggest dish of eggplant parm I've ever made.  All I've got to do tomorrow is pop it in the oven.  Of course there will be pasta, maybe something "puttanesca-ish".  Lot's bread, beer and wine ... and of course a martini for the chef.  I'm sure there will also be some serious singing and kitchen dancing too.

Until next time, enjoy the weekend.  Treat yourself to a great meal and a well made cocktail.  You know you deserve it!

Glenn
Posted by G No comments:

Friday's have been pasta night lately here at La Cucina Castano.  Of course, if it were up to me, every night would be pasta night!  But Friday night's are all about cocktails and pasta.  Not a better way to end a stressful week as far as I'm concerned.

A few of the regular crew - Kathi & Michael, Mick & Troy - were over for some food, drink and hockey - Rangers lost to the Pens in a shootout :-( .  Being a Friday and having to work all day there was not a lot of time for preparation.  The idea was to keep it simple.  So, after a quick stop at Wegman's on the way home for some olives (Wegman's has the best olive bar) and fresh bread (tuscan garlic loaf, still warm out of the oven - perfect timing!) it was time get home before anyone arrived to mix a cocktail and start the water boiling.

For some reason I wanted to do a cajun inspired sauce.  Not sure what brought that inspiration on but I just rolled with it.  Due to time constraints it needed to be quick and simple.  Mission accomplished.  I started with olive oil, garlic and crushed red pepper, like I do with just about any sauce I make.  Once the garlic was simmering nicely I added tomatoes (peeled, canned), some clam juice, chopped green onion and andouille sausage (cut into slices).  I didn't have a cajun spice mix readily available (forgot I had used it all up last time I was on a cajun bent) so I added garlic powder, cumin and chili powder.  Also some worcestershire sauce.  Normally this type of sauce I would let simmer for quite a while but as the guests were arriving soon I cranked up the heat to get the sauce to a boil.  I needed the wonderful flavor of the andouille sausage to infuse the sauce and fairly quickly.  As the sauce was reducing too much - great for intensifying flavors but not so great when you have a lot of pasta to coat - I added more liquid in the form of clam stock.  I was originally planning on adding some file powder at the end as a thickening agent but I had cooked two pounds of pasta and had just enough sauce to coat the pasta so I passed on that idea.  For the pasta I used fettucine (Lidia's, a very good, not too expensive brand).  Once the pasta was cooked it was quickly removed from the water into the sauce and raw shrimp was added.  The shrimp then cooked as it was stirred into hot pasta and sauce.  Everyone seemed to love it.

Since I was cooking a cajun inspired sauce I decided cajun martinis were in order.  Pepper vodka, vermouth and some of the juice from a bottle of Trappey's peppers.  Tasty and spicy, just the right amount of kick.

Tasty cocktails and cooking for my friends.  What a great way to kick off the weekend.  Hope your Friday was as good as mine.


Posted by G No comments: