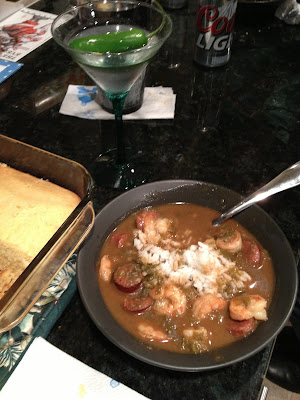 We had that unusually warm spell for a few days last week.  Not a bad thing for the first week in December.  But really, just a big tease, you know?  When the weather turned back to it’s normal cold, windy, miserable self my thoughts turned to gumbo.  I hadn’t eaten it or made it in quite a while.  It just seemed like the perfect dish for the weather.  Something to fill the bellies and warm the souls of our Friday night guests (Kathi, Michael and Kristen) in la cucina castano.

I do love a good gumbo.  Having traveled to New Orleans many times and having eaten the real deal I became a big fan (though I must admit that the best gumbo I ever ate was not even in Louisiana but in Memphis TN, some little restaurant on Beale Street whose name I cannot remember).  I’ve cooked it many times myself with some success.  I’m certainly not an expert at gumbo but I have at times done it justice.  This time I was determined really nail it, which I think I did.

The whole key is the roux.  It is a slow, patient process to get it nice and dark without burning it.  I took about 45 minutes to get it where I wanted it.  My arm felt like it was going to fall off after constantly whisking it that whole time.  That’s the important part.  If you don’t keep whisking and stirring it and it burns you’ve got no choice but to throw it out and start again.  After you get the roux where you want it the rest is easy.  I went with sausage and shrimp this time.    After about three hours of bubbling away it came out perfect (at least in my eyes ... and taste buds).  I really nailed it this time.  I was quite proud.  I’d give you the recipe but honestly I don’t know that if I made gumbo a hundred more times I would make it the exact same way again.  There are probably as many ways to make gumbo as there are people who make it.  If you want to give it a shot google some recipes and have at it.  Try a little of this and that.  There’s no right or wrong way to make it.    Just have fun ..... and don’t burn the roux!

Of course it’s not all about the food.  Cocktails are the other half of the equation and for this rendition of Friday Night at La Cucina Castano I decided to go with Cajun martinis to wash down the gumbo.  I had never made cajun martinis, which I know is shocking given my affinity for martinis.  I’m sure in the past I have had some iteration of one during one of my trips to the crescent city, but if I did those memories are now lost along with the brain cells they killed along the way.  Some pepper vodka - the only brand I could get at the local Wine & Spirits shoppe was Absolut.  I’m not a fan of Absolut of the their Peppar was not half bad, I must admit.  Just a splash of vermouth, some of the juice from a bottle of Trappey’s hot peppers, granish with a fresh jalapeno and I was off to the races.  Quite tasty.  Next time, with a little more planning, I will infuse the pepper vodka with the jalapeno for some serious kick!

All in all a successful evening.  The food was banging, the cocktails were delicious, the tunes were cranking and the vocals were loud, if not always in tune.  Another fun night in La Cucina Castano with good friends.
Posted by Unknown