There’s nothing like the comfort of home and a delicious cocktail to end a week from hell at work.  My friend Steve had told me about the blood orange martinis he made so I decided to try his recipe this past Friday.  Two parts orange vodka, one part blood orange juice, 1/2 part Grand Marnier and some blood orange bitters.  Not half bad.  I’ll have to fiddle with the proportions a bit, I think, but a promising start to the weekend. 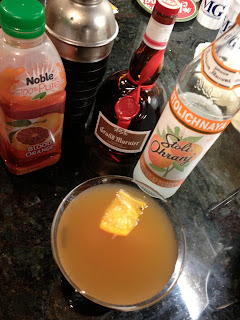 Of course I worked late Friday and missed the annual Christmas week get together with the crew at Theo’s, but Kathi, Michael and Kristen came over to La Cucina afterwards and kept the party going.  Needless to say some very loud kitchen singing ensued.   We had the Ion cranking.  Michael, the technical advisor to La Cucina Castano, bought a late Christmas gift - a set of two wireless omnidirectional microphones to replace the one corded microphone that came with the Ion speaker.  Tested them out today and they work like a charm.  They will be put to good use Monday night as we host the first New Year’s Eve party in The Brown Kitchen.  La Cucina Castano will be rocking with the crew all here.  It’s going to be a fun time!
Posted by Unknown