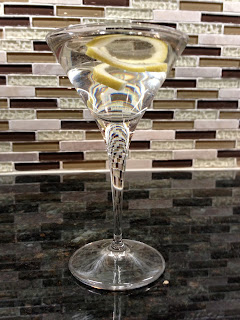 As I sit here and enjoy a Bombay Sapphire East martini I am thinking of the currently outdated concept of the ‘Three Martini Lunch’.  This was something that was in vogue for a long time but fell out of favor in the 1970’s and is pretty much unheard of today.  The idea was that business lunches between executives would be leisurely affairs that would take the better part of an afternoon while consuming at least three martinis.  This time would allow deals to be made while executives could have indulgent lunches they could write off as business expenses.

I have quite a large collection of martini glasses.  Most of them are similar to what you might find in any bar or store.  They are big.  We’re talking glasses that hold about 6 -8 oz of martini.  Mind you, a martini is pure booze.  No mixer, no juice, no ice in that glass.  Just booze.  Three martinis at 6 - 8 oz each is a pretty hefty haul of alcohol.  You have a tiny bit of lower proof vermouth and then the rest is all high octane alcohol - I’m not talking about frou frou martinis here, by the way, I’m talking about a real martini.    If you’re drinking a traditional gin martini, you’re most likely looking at 96 proof.  Over 20 ounces of 96 proof alcohol over the course of a lunch, even a leisurely lunch, and you’re going to be feeling no pain.

And that is where the modern martini glass and idea of portion control comes in.  I have no scientific evidence to back this up, but I’m pretty sure the martini glasses in days of yore were not the behemoths they are today.  They are probably more similar to what I am drinking my martinis out of tonight - a glass that comfortably holds about 3 - 4 oz of cocktail.  There are several positives to having this size of a glass.   One is that the drink is small enough that it should stay cold and not get all warm and room temperature on you by the time you are swilling the last drops.   Secondly, you can have two martinis and still function in a somewhat responsible manner.   I have always believed that two martinis is just about right - it means relaxing and unwinding, either after a hard day or before a good meal.  Three or more martinis means you just want to get really drunk - not that there is anything wrong with that.  Just sayin’.

People tend eat whatever is on their plate.  The brain is hardwired to finish the meal.  That is why portion control helps in weight loss.  Big plates, big bellies.  Small plates, healthy people.  I think the same applies to cocktails.  Can I have three 4 oz martinis and feel as satisfied as if I had three 8 oz martinis?  I think so.

So what’s the motto of this story?  In the words of the immortal Steve Martin - Let’s Get Small.  Keep the drinks reasonably sized and cold.  You’ll feel better in the morning.  And if you really, really want to get shit-faced, just make twice as many.